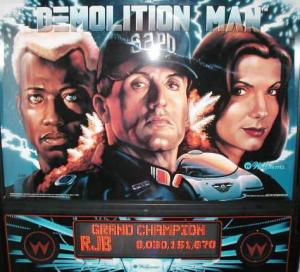 Sly Stone and Wes Snipes
doing what they do the best:
kickin’  ass…’nuff said!

Camiele: What can you say about a paring like this:  Wesley Snipes with his multiple Black Belts and Sylvester Stallone with his Rocky-Rambo badassery?  It’s like French chocolate to an action freak.  There’s just too much delicious in this movie to pick a couple moments to highlight.  But, let’s start with the names of our pro and an:  Stallone as John Spartan, a name that suggests any of the many reckless and unbridled gods of war that were the Spartans; Wesley Snipes as Simon Phoenix, a man not trifled with as he always leaves his trail in an explosion and always rises from the debris.  Then you’ve got names like Edgar Friendly and Bobby Lamb that just seem too good to be true.

It’s like 1984 with more explosions than bowels after collard greens.  There’s nothing more fantastic than a world that sees the merger of San Diego, Los Angeles, and Santa Barbara; Schwarzenegger as president; and where every single restaurant is Taco Bell –except, of course, the underground city of people left before the 21st century who like to read, like their burgers dripping with grease, and still live by the law of the jungle.  It’s a movie so filled with all of my favourite things –two unyielding warriors battling, sharp contrasts in society, and battle for the universe.  Add to that a soundtrack of jingles from the 1950s and you’ve got the perfect film to add to any action hero collection.

Right now, I get my jabberjaw jollies writing about Halloween costumes. Star Costumes has been in business since 1980 and online since 1997. With almost 30 years of experience in the Halloween costume industry, StarCostumes.com is dedicated to offering the largest selection of adult costumes and kids costumes for our customers at some of the most competitive prices on the web. If you want to give me a buzz, I can be reached at cmlewhite at gmail [dot] com.