i'm really into everyone wearing white t-shirts 4 sizes too big in this movie. and the tiny, adorable, butchy daughter. 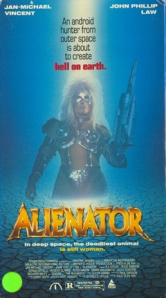 The first 45 minutes of “Alienator” had us reaching for the FFWD button. I mean, there were some high points, including everything being perfectly reasonable:

…but it was otherwise a lot of glaring and glowering about a space prison. In short, a notorious space criminal (we can tell he’s a space criminal because he has a silver ski vest and matching headband) makes it to Earth, and holes up with some unsuspecting Earthlings in a cabin in the woods. We were mere SECONDS from hitting the Eject button when this vision of love made her first appearance: 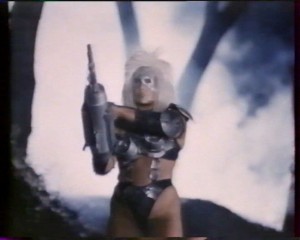 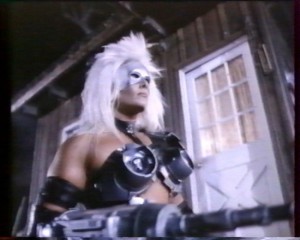 Alienator, or Ziggy Stardust crossed with an auto parts store.

By the way, the tagline for the movie is: “In deep space, the deadliest animal is still woman”.

The metal underpants? The thighs the size of stout German children? It's all too much to bear.

So, who is Alienator? Musclelady Teagan Clive, who is taking up space in the back of your brain as the bodybuilder in David Lee Roth’s video for “California Girls”. There’s not much on her imdb page, except for her biography, which is composed of one sentence. Please, meditate on this:

She made headlines when she showed up for a bodybuilding competition that had been canceled without her realizing it until after she entered the arena.

don’t fuck crazy girls,
’cause they will beep you non-stop
and kill everyone.